Liverpool manager Jurgen Klopp admits what his side have done at the midpoint of their season could not be matched by many teams but he expects a real fight for the next 19 matches.

A 1-0 win over Wolves thanks to Sadio Mane’s 14th goal of the campaign just before half-time made it 18 wins and a draw so far as they re-established their 13-point lead at the top.

“If it would be easy to win the amount of games we have done then more teams would have done it. It’s not easy,” he said.

“We have to fight with all we have. I couldn’t be more proud of what they did a gain to get that result over the line. It was just impressive. I’m really happy about that.

“But there is a long way to go for all of us. Everybody asks me what it was like in 2019 – my 2019 team was brilliant but that’s not important, we count seasons, not years.

“The 2019-20 season is not over. We are halfway there. There are 19 games to play. That’s a lot and probably 19 of them will be like this tonight, for different reasons.

“We will be facing teams who will be fighting for the league with all they have, and the fight for the Champions League and Europa League has opened up again.

“We have to be ready. Who cares about points in December? We have just created a basis we can work with from now on.”

Seen a lot of people comparing lallana today with boly v Leicester.
Got to be fair and take our wolves hats off. Hits boly on upper arm and lallana on shoulder. So with the new handball rule was the correct decision for our goal to not stand. 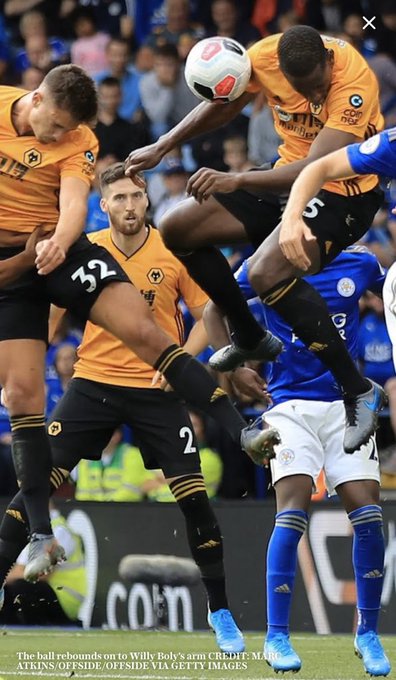 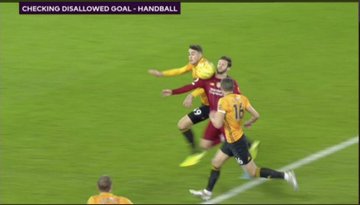 VAR dominated the post-match discussion as Mane’s goal was originally ruled out for handball by Adam Lallana by referee Anthony Taylor only him to overturn that after a referral.

Afterwards, Mane said: “I saw the ball hit the shoulder so I know I had scored. Sometimes you are lucky, sometimes unlucky, but that is part of football.”

Moments later Wolves scored through Pedro Neto only for the equaliser to be chalked off as Jonny’s foot was deemed to be marginally offside.

Jonny was penalised for the tightest of offside calls and Neto’s strike was chalked off by VAR. 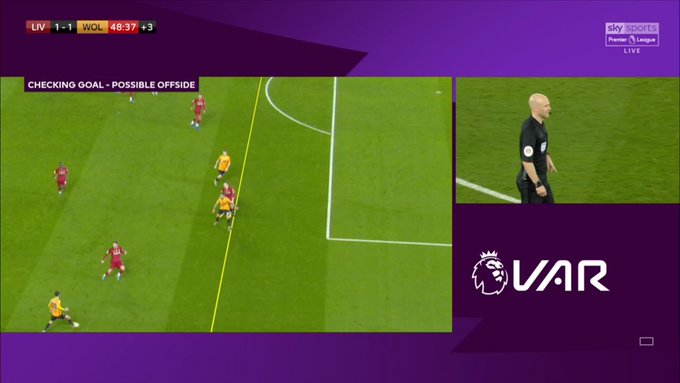 407 people are talking about this

“I think Nuno wasn’t happy with the VAR procedure. What can we say about the decision? For me, I was surprised when the whistle came for the handball,” added Klopp.

“I thought it was a clear shoulder from the first second. But how can you be sure? So it took a while.

“After three minutes the decision was done. I saw immediately a kind of relief for a second, we are human beings so that’s normal.

“But the next long ball we weren’t there for the second ball, Adam makes a foul. Free-kick, corner, (Wolves) goal.

“It didn’t count obviously but it brought the momentum to their side.

“They were really aggressive and really angry with us as well, we had nothing do with that situation but sometimes that’s how it happens.”

Klopp added: “It was a tough game, I expected that. Nuno has a sensational bunch of players there. In the first half we controlled the game, scored the goal, but it was not handball. It was a clear shoulder from Adam.

“It is about decision making. I would prefer refs to go to the screen. I think the first situation it would have helped. The handball could have gone quicker. These things happen. Nobody likes it. I thought the first goal was a clear goal.”

“I am sorry but today I don’t want to speak about VAR, it is not about that. I just don’t want to mention anything about it,” he said.

“The only thing is the decisions are being taken by a referee that is miles away from here and he doesn’t feel the game, he is not at the game.

“I am a coach, I have to think about my own things but what we don’t want is what is happening – Liverpool are a fantastic team, club, stadium and we are celebrating a non-goal. Come on.”

Wolves skipper Conor Coady told Sky Sports: “For me, it is not working. A lot of people saying they are getting the right results, but I cannot get my head around it. It happened against Man City, but we showed character. I thought we played well today.

“VAR is killing us. It is constantly against us. I don’t know where we are going wrong. It is affecting games. No-one likes it. It is still confusing.”

Wasn’t even a hand ball in the end

On a possible handball in the lead-up to Mane’s winner, Liverpool defender Virgil Van Dijk told Sky Sports: “It is part of VAR. It is not ideal. What can I say? I won’t say much about it. I need to see it back. I can’t remember it clearly.

“I just heard there was complaints of handball, I thought it was for Adam (Lallana). What can we do? They made a decision and the goal stood.”