Italian authorities have implemented draconian measures to try to halt the coronavirus outbreak in the north of the country, including imposing fines on anyone caught entering or leaving outbreak areas, as a third person was confirmed to have died on Sunday.

The number of cases of the virus in the country has risen to 152.

Police are patrolling 11 towns – mostly in the Lombardy region, where the first locally transmitted case emerged – that have been in lockdown since Friday night. The latest victim died in the Lombardy city of Crema.

“The woman had been admitted to oncology, so was in a very compromised situation and also had coronavirus,” said Giulio Gallera, the Lombardy health and welfare minister.

Measures were stepped up after a 78-year-old Italian man infected with the virus died in the Veneto region on Friday. A postmortem performed on a 77-year-old woman in Lombardy on Saturday confirmed that she was also infected, but it is unclear if the virus caused her death. The woman is reported to have been recovering from pneumonia and had visited the emergency unit of a hospital in Codogno, near Lodi, a few hours after the first man confirmed to have contracted the disease, a 38-year-old, had passed through.

Angelo Borelli, the head of Italy’s civil protection service, said so far 152 cases of the virus have been confirmed in the country, including the three people who have died, an Italian man who recovered, and a Chinese couple being treated for the illness in Rome.

Austria suspended train services over the Alps to Italy for about four hours late on Sunday before restarting them after two travellers tested negative for coronavirus.

A train carrying about 300 passengers from Venice, Italy, to Munich in Germany was halted on the Italian side of the Brenner Pass before being allowed to continue its journey after the two tested negative, authorities said.

About 50,000 residents in the towns under lockdown have been told to stay home and avoid social contact, while schools, shops and businesses – apart from chemists – have been closed and festivities and sporting events including Serie A football matches and the final two days of the Venice carnival have been cancelled.

Schools and universities will also be closed for at least a week in Lombardy, Veneto, Emilia-Romagna and Piedmont, while similar measures have been taken in Liguria and Alto Adige.

Milan fashion week has also been affected by the outbreak. Giorgio Armani, whose show was scheduled for 4pm on Sunday afternoon, announced on Saturday night that guests should not come to the venue. Instead, the collection would be shown to an empty room.

“The decision was taken to safeguard the wellbeing of all his Armani’s invited guests by not having them attend crowded spaces,” said a press release. Models still presented the clothes, with the show streamed on the brand’s website, as well as on Instagram and Facebook.

The Italian prime minister, Giuseppe Conte, said: “We have adopted a decree to protect the health of Italians, which is our priority and which ranks first in the list of constitutional values. He urged people to have faith in the political and scientific institutions, which are doing everything possibl. 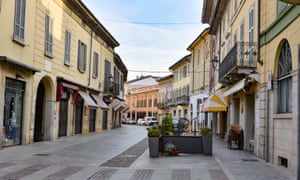 Locals wearing face masks were already lined up outside a supermarket in the town of Casalpusterlengo, a 10-minute drive from Codogno, on Sunday morning. Shoppers were made to wait, then allowed to enter in groups of 40 inside the store to stock up on provisions.

Although one woman in the crowd downplayed the virus, telling other shoppers it was not fatal if properly treated, others were less sanguine. It’s inhuman, one man who gave his name as Sante told AFP. Fighting over four sandwiches is just disgusting.

Hundreds of colleagues who worked with the first infected man, a researcher at Unilever, were being tested but it was still unclear whom he had contracted the illness from. The man, who was in intensive care, was initially thought to have caught the virus after meeting a colleague who had recently returned from China, but the colleague tested negative.

“Unfortunately, the person who was considered to be ‘patient zero’ was not,” said Attilio Fontana, the president of Lombardy. “We need to look elsewhere. We are following two hypotheses, and we will try to understand if one of the two is correct.”

The man who died in Veneto was diagnosed with pneumonia a few weeks ago but had not travelled to China nor come into contact with anyone who had.

Unfortunately, we haven’t managed to limit the spread of the virus,” said Roberto Burioni, a professor of microbiology and virology at the Vita-Salute San Raffaele University in Milan, which has also closed.

And we need to face the fact that it is spreading quickly. At first, we thought that the virus was only abroad, but now it is also in Italy. People should try not to panic but limiting the spread is, in part, down to our behaviour. Those who have been in contact with someone infected must isolate themselves. Crowded places should also be avoided; sacrifices need to be made to try to overcome the virus.”

The first two cases of the virus in Italy were those of a Chinese couple from Wuhan who arrived in the country on 23 January. They were being treated at Spallanzani hospital for infectious diseases in Rome. A group they were travelling with were released from hospital this month after being quarantined for 14 days. A third case in Rome was that of an Italian man who had caught the virus in China.

Giuseppe Sala, the mayor of Milan, where fashion week wraps up on Monday, asked for all schools to be closed for a week. “It’s a prudent measure, then we’ll see if a week is sufficient. There are so many events in the city. I don’t imagine everything shutting down and being cancelled, but events that are not obligatory and which can be postponed, should be.”