MotoGP test very similar to last year : Rossi 'quite fast', but 'a little worried' - Too Interesting
Skip to content

The Italian, 41, spent much of last year troubled by premature tyre wear during races and was absent from the podium from round four onwards.

Although Rossi ‘feels good’ on the 2020 M1 and is ‘quite fast’ on new tyres, The Doctor was dismayed to lose grip after 5-6 laps (see below) while the other Yamahas held a strong pace.

For example, by the eighth lap of his long run Rossi’s pace had dropped to a 1m 55.8s. That compared with a ‘54.7s for Fabio Quartararo, ‘54.9s for Maverick Vinales and ‘55.1s for Franco Morbidelli. 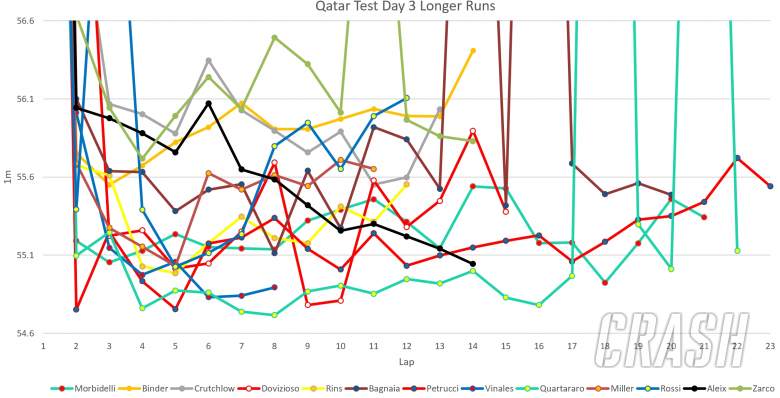 Today we are a little bit worried because – not so much about the position, because unfortunately I crashed with the second tyre and I think I could have improved the lap time – but more about the pace, said Rossi, who featured in the top three during the final day but was eventually left twelfth in terms of best lap.

We tried to make a long run, but we had some problems with the tyres very similar to last year. So it looks like, that after some laps, unfortunately I have to slow down so this is not good news.

I feel good with the bike. I am quite fast, especially in the first 5-6 laps my pace is good. Unfortunately, at the moment it’s not enough to try for the win.

But now the tests are finished and we will see during the race weekends. In the races, it‘s always different.

Team manager Massimo Meregalli added: Over the next week we will analyse Valentino’s data and focus on improving his tyre life. Anyway, he is not far from the top, so we expect him to be in contention at the front.

Despite his lowly position on the timesheets, Rossi was just 0.474s slower than the best flying lap by factory Yamaha team-mate Vinales on a night when the top 18 riders were covered by less than one-second.

It is incredible,” said Rossi. “It‘s like Moto2, so this is very good for the championship, the fans, and the races, because it looks like there‘s a good balance between the different riders and bikes.

But who does he think are the favourites going into the season-opener on March 6-8?

I think that this winter Rins, Vinales, Quartararo are very fast – also Franco today and Marquez at the end. But we are not very far, so the feeling with the bike is good, Rossi explained.