Sebastian Vettel 'first option' at Ferrari for F1 2021, wants to stay - Too Interesting
Skip to content

Sebastian Vettel is confident he will sign a new contract at Ferrari after being confirmed as their “first option” for a 2021 seat, with team boss Mattia Binotto insisting they are not considering a move for Lewis Hamilton.

Vettel, who endured a below-par 2019, is in the last year of his deal with F1’s most famous team and, with Charles Leclerc signed up long-term, would be the fall-guy if Ferrari were to make a move for another driver.

But after launching their new-for-2020 car, Ferrari gave the four-time world champion a huge show of faith by claiming they are not looking elsewhere.

“Sebastian is our first choice at the moment,” said Binotto.

“It is something we are discussing with him and we will continue to discuss. He is certainly our first option, and our preference.”

Binotto added: “I think that Seb will be very fast this season. He knows what he needs to do and he prepared himself over the winter time to be ready for the start of the season.

“He’s very focused and concentrated, and hopefully he’ll still be our driver in the future.”

After title challenges in 2017 and 2018, Vettel fell back to fifth in the championship in 2019 – a season in which he was constantly rumoured to be considering his future in the sport. 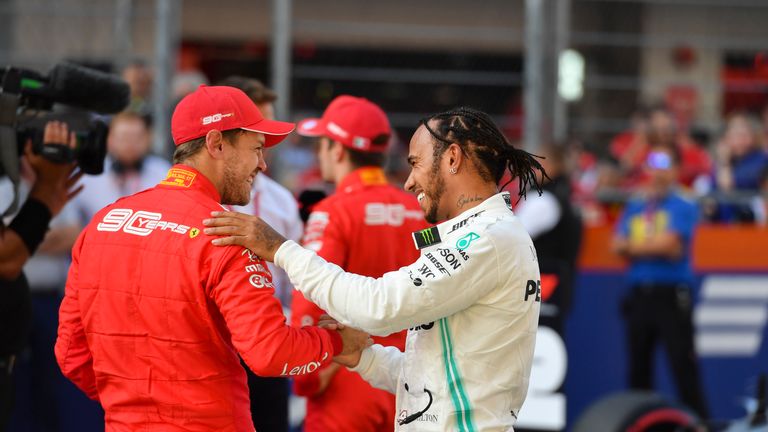 But the German, 32, once again vowed he “loves driving, and loves this sport” at Ferrari’s launch event, and told Sky F1 he is committed to Ferrari.

“I would like to [stay], yes,” Vettel told David Croft in Reggio Emilia. “The priority right now is on 2020 and then we see.

“I have been in the position already before with Ferrari, and it’s only February. Last time we confirmed the contract for the future it was August, so I don’t think it changes much.

“The intentions are clear and I’m sure we’ll sort it out.

Ferrari and Vettel’s latest comments are likely to dampen speculation of a swoop for Hamilton, the sport’s six-time champion who is also out of contract this year.

“We are not considering that at the moment,” said Binotto. “We are focused only on our drivers.”

Vettel added: “I feel good, I feel confident. There are things I can do better and I am sure I will do better this year.”